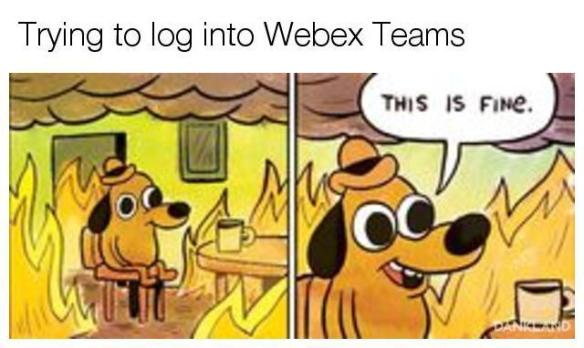 How are you supposed to handle outages? What happens when everything around you goes upside down in an instant? How much communication is “too much”? Or “not enough”? And is all of this written down now instead of being figured out when the world is on fire?

You might have noticed this week that Webex Teams spent most of the week down. Hard. Well, you might have noticed if you used Microsoft Teams, Slack, or any other messaging service that wasn’t offline. Webex Teams went offline about 8:00pm EDT Monday night. At first, most people just thought it was a momentary outage and things would be back up. However, as the hours wore on and Cisco started updating the incident page with more info it soon became apparent that Teams was not coming back soon. In fact, it took until Thursday for most of the functions to be restored from whatever knocked them offline.

What happened? Well, most companies don’t like to admit what exactly went wrong. For every CloudFlare or provider that has full disclosures on their site of outages, there are many more companies that will eventually release a statement with the least amount of technical detail possible to avoid any embarrassment. Cisco is currently in the latter category, with most guesses landing on some sort of errant patch that mucked things up big time behind the scenes.

It’s easy to see when big services go offline. If Netflix or Facebook are down hard then it can impact the way we go about our lives. On the occasions when our work tools like Slack or Google Docs are inoperable it impacts our productivity more than our personal pieces. But each and every outage does have some lessons that we can take away and learn for our own IT infrastructure or software operations. Don’t think that companies that are that big and redundant everywhere can’t be affected by outages regularly.

Stepping Through The Minefield

How do you handle your own outage? Well, sometimes it does involve eating some humble pie.

I don’t envy the people at Cisco that spent their entire week working to get Webex Teams back up and running. I do appreciate their work. But I want to figure out where they went wrong. I want to learn. I want to say to myself, “Never do that thing that they did.” Or maybe it’s a strange situation that can be avoided down the road. The key is communication. We have to know what happened and how to avoid it. That’s the real learning experience when failure comes around. Not the fix, but the future of never letting it happen again.

1 thought on “Outing Your Outages”