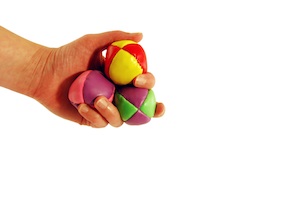 When my eldest son was just a baby, he had toys that looked like little baseballs. Long story short, I decided to teach myself to juggle with them. I’d always wanted to learn and thought to myself “How hard can it be?” Well, the answer was harder than I thought and it took me more time that I realized to finally get the hang of it.

One of the things that I needed to learn is that adding in one more ball to track while I’m trying to manage the ones that I had wasn’t as simple as it sounded. You would think that adding in a fourth ball should only be about 25% harder than the three you had been working with before. Or, you might even believe the statistical fallacy that you’re only going to fail about a quarter of the time and be successful the rest. The truth is that adding in one more object makes your entire performance subpar until you learn to adjust for it.

Clogging Up the Pipe

I mention this example because the most obvious application for the juggling metaphor is in Quality of Service (QoS). If you’ve ever read any of the training material related to QoS over the years, you’ll know that an oversubscribed link doesn’t perform poorly for the packets that are added in at the end. When a link hits the point of saturation all of the data flowing down the pipe is impacted in some way, whether it’s delays or or dropped packets or even application timeouts.

We teach that you need to manage congestion on the link as a whole and not just the data that is added that takes you over the stated rate. This is why we have queuing methods that are specifically tuned for latency sensitive traffic like voice or video. You can’t assume that traffic that gets stuffed in at the start will be properly handled. You can’t assume that all data is just going to line up in an orderly fashion and wait its turn. Yes, the transmission queue on the device is going to process the packets in a serial manner, but you can’t know for sure what packets are going to be shoved in the queue without some form of management.

QoS for Your Brain

All of these lessons for juggling packets and prioritizing them within reason don’t just resonate with technology. The same principles apply to the work you do and the projects and tasks that you take on. I can’t tell you the number of times I’ve thought to myself “I can just handle this one little extra thing and it won’t make a big difference.” Except it does make a big difference in the long run. Because adding one more task to my list is just like adding one more ball to the juggling list. It’s not additive. It adds a whole new dimension to what you’re working on.

Just like with the bandwidth example, the one extra piece added to the end makes the whole experience worse overall. Now you’re juggling more than you can handle. Instead of processing what you have efficiently and getting things done on time you’re flipping back and forth trying to make sure that all the parts are getting worked on properly and, in the end, using too much time inefficiently. Add in the likelihood that this new task is “important” and gets placed near the top of the list and you can quickly see how the priority queue example above is fitting. When every task is critical, there are no critical tasks.

Prioritize Before The Piles Happen

As luck would have it, the best way to deal with these issues of juggling too many tasks is the same as dealing with oversubscription on a link. You need to understand what your ability to deal with tasks looks like. Maybe you can handle eight things a day. Are those eight complex things? Eight easy things? Four of each? You need to know what it takes to maximize your productivity. If you don’t know what you can handle then you’ll only find out you’re oversubscribed when you take on one thing too many. And it’s too late to turn back after that.

Next, you need to manage the tasks you have in some way. Maybe it’s a simple list. But it’s way easier if the list has a way to arrange priority and deal with complicated or less critical tasks after the important stuff is done first. Remember that something being complex and critical is going to be a challenge. Easy tasks can be knocked out and crossed off your list sooner. You can also make sure that tasks that need to happen in a certain order are arranged in that way.

Lastly, you need to model the QoS drop method. Which means saying “no” to things that are going to oversubscribe you. It seems inelegant and will lead to others getting frustrated that you can’t get the work done. However, they also need to understand that if you can’t get the work done because you’re tasked with too much you’re going to do a poor job anyway. It’s better to get things done in a timely manner and tell people to come back later than take on more than you can do and disappoint everyone. And if someone tried to get creative and tell you their task is too important to put off, remind them that every task is critical to someone and you decide how important things are.

This is absolutely a case of “do as I say, not as I do”. I’m the world’s worst for taking on more than I can handle to avoid making other people feel disappointed. No matter how many times I remind myself that I can’t take on too much I have been known to find myself in a situation where I’m oversubscribed and my performance is suffering because of it. Use this as an opportunity to get a better handle on juggling things on your side. I never got good enough to juggle more than four at once and I’m okay with that. Don’t feel like you have to take on more than you can or else you’ll end up working in a circus.