Cisco has introduced a new unified communications endpoint into its portfolio of devices that it hopes will bring a new user experience to customers wanting to unify video and voice in the palms of their hands.  The Cisco Cius represents a large investment into the intersection of mobility, voice, and video.

I won a Cisco Cius at Cisco Live this year.  I was excited to get it into my hands and start playing with it.  I wanted to put it on my desktop and utilize every function I could.  It’s been four months since I won the device, and I’ve spent time on and off putting it through it’s paces.  Some of the things I found were good.  Others, no so much. 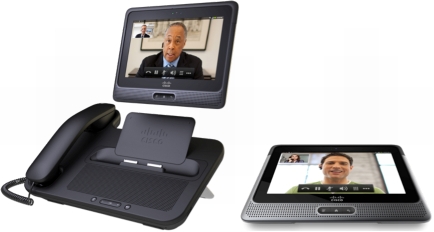 The Cius is an Android-based (Froyo 2.2.2) tablet.  It has a 7″ screen (1024×600) with an Atom Z615 processor and 1GB of RAM.  It has an 802.11 a/b/g/n radio and a 4G LTE radio in an upcoming model as well as front and rear cameras, the latter capable of capturing 720p video.  It is also capable of being docked with a port replicator and handset that allows for speakerphone as well as USB ports to drive a keyboard and mouse.  Why?  Because the Cius also includes a Virtual Infrastructure Experience (VXI) client for running a virtual desktop as a replacement for your desktop PC.

When I got the unit, I first had to cool my jets for a bit.  The unit had pre-production software that wasn’t quite up to specs yet.  One of the things that didn’t work was application installation.  The Cius provides its own app store, AppHQ, which can be controlled via corporate policy to restrict downloads to this store.  You can also sideload apps from the regular Android market, but if your admin overlords decree that you shant be able to do that, you’ll be locked into AppHQ.  I took my time poking around the interface and noting how different it was from my iPad.  This was my first attempt at using a Google tablet, so it did take a bit of getting used to, layout wise. As well, the construction was a little different and the unit felt more ‘solid’.  Not to say that Apple’s iPad feels cheap, but the Cius is a little more dense than the aluminum used on my gen 1 iPad.  However, due to the software difficulties I was unable to do much with the Cius.  I did use it to record my Ultimate Cisco Live Attendee video right before I packed it away for the trip home.  Here you can get a feel for the video quality from the front VGA camera:

After I got it home, I had many stops and starts trying to get the right firmware to update it to a point where I could install things.  Thanks to some help from my friend Jon Nelson, I was at least able to get the right software to register it with my CallManager server, which I finally had to upgrade to 8.5 to get everything working correctly.  When I got the new firmware load installed, I was able to browse to the Android Market and start installing apps.  The process was pretty straightforward, and every app was available for installation.  The 7″ screen did seem a little cramped from my 10″ iPad, but it was very usable for simple browsing tasks.  I also noticed that the media dock didn’t secure the unit when docked.  Normally, I expect to hear a click or a snap as the locks engage on something like that, but there was nothing here.  In fact, if you don’t pay attention when docking the unit, it will slip and slide right off into the floor.

After playing with the Cius for a few days, I hit my first show stopping bug.  In the current firmware load there is a problem with dialing calls that require Forced Authorization Codes (FACs).  The dialpad for the unit disappears when the dial string is completed and won’t show up again until the call is connected.  The problem for me is that all my long distance calls (which represent the majority of my office calls) require me to enter an access code when I dial.  Without a dialpad, I can’t enter the code to complete the call.  For this reason, the 9971 I normally use has stayed on my desk and the Cius has been relegated to the side desk where it gets tested on occasion.  I’m sure that Cisco has seen the oversight in not allowing me to have a dialpad during ring out and will be releasing a firmware to fix that in no time.  Oh, wait…

In order to expedite my firmware update desires, I signed up for the Cius developer program and gained access to the firmware update service for testing.  Never one to shy away from putting beta code on my devices, I followed the developer directions and waited patiently for my Cius to update.  It took a couple of hours to pull the new code and reboot.  Where it promptly locked up.  Every time I tried to install new code, it rebooted and hung on the restart, the Cisco logo taunting me for hours on end until I performed a hard reset.  Which of course reset the firmware back to the old version.  And erased anything I might have installed.  Oh, bother.

Figuring that beta firmware may be just a little too advanced, I decided to head over to Cisco’s website and pull down a new production firmware for CUCM so that I can update it like that.  Which is where I finally encountered the “You do not have a valid contract” error that has bitten so many people as of late, especially Ethan Banks.  Of course, I don’t have a SmartNet contract for this device since I didn’t buy it in the first place.  I figure I need to order one if I want to figure out why it keeps locking up or why I can’t get the dialpad to show up to make long distance calls.  I know the firmware I managed to load did fix some other transient issues, like the unit losing connection to CUCM every night and requiring a reboot to establish a connection again.  However, I’m going to need a lot of support to bring this device up to the point were I consider it a replacement for my 9971 deskphone.

If I had to use one word to describe the Cius, it would be potential.  Cisco has obviously invested a lot of money into this unit and sees it as a big step going forward to unify all of their cutting edge technology into a single portable unit.  It makes for a really nice demo and you can argue that it makes a statement sitting on the desk.  The hardware seems to be acceptable for use as a business communications endpoint.  However, software quirks show it to be an early 1.0 product release.  Difficulties in getting my unit into a usable condition hampered me from replacing my current desk phone.  Inability to get software to load without causing reboot loops has forced me to reformat more times than I care to count.  And short-sightedness at allowing me to download production firmware updates means that it will likely sit on the side of my desk until such time as someone decides that, as a Cisco partner, I am not a stinking filthy pirate and only want to get my Cius running so that I can show it off to coworkers and customers in the hopes that they buy a truckload of them.  However, until that day comes, my Cius will be relegated to little more than a curious desk ornament, right next to the Buckyballs and my stressball collection.  Let’s hope I can fix that sooner rather than later.

The Cisco Cius I have was won in a contest at Cisco Live 2011.  I recieved a Cius and a media dock, as well as a Cisco-branded Jawbone Icon headset.  At no time did Cisco ask me to write a review of the device, nor did they place any restrictions on the content of any reviews written by me.  They did not ask for any consideration nor were they promised any by me in the crafting of this post.  The opinions and conclusions reached are mine and mine alone.