One of the highlights of Cisco Live attendance is the conference backpack.  Geeks are always proud to carry around things with logos on them, especially if they are useful.  The backpacks at Cisco Live allow networking rock stars to carry all manner of dark magic with them and impress the unwashed masses with the skills of a real engineer.  Sometimes the bag is an instant hit and generates lots of good press.  Other times it’s a lightning rod for controversy and catcalls.  Given that many have only been to one or two Cisco Live events or may not be familiar with the backpacks of yore, I thought I might dig into my stash of carrying cases and have a nostalgic trip down memory lane.  Note that with one exception I’ll only be talking about bags that I have gotten from Cisco Live personally.  I know that there have been some cool ones before 2006, but since I don’t have them I can’t really do them justice.  Here you go:

The 2005 Cisco Live bag was amazing, simply put.  So amazing that I didn’t even go to the conference and I still had to have one.  The reference design for this bag is the APC TravelPower Backpack.  This venerable design was APC’s foray into the market and was an attempt to provide not only a quality case for carrying your things but a way to charge them as well.  The backpack could be used with the APC TravelPower system, which placed a battery unit in one of the many pockets along with cables that could be routed throughout to provide power to laptops, cell phones, PDAs, and much more.  Then, a single power cable could be snaked out of the bottom and the whole backpack plugged into the wall.  Cisco must have just purchased a bunch of them from APC and had them branded with Cisco Live 2005, because they conference bag is identical (without the expensive TravelPower electrical stuff).  This bag is the mark of a seasoned Cisco Live Veteran.  I bought the APC backpack version right before APC stopped making them and I still carry it to this day.  I love all the extra pockets and places to hide my cables/adapters/junk.  My only real gripe is that it won’t hold a 17″ laptop (other than a MacBook), so I’m force to use a different pack for my behemoth Lenovo w701.  I love this backpack and will carry it until it frays away to nothing.  A note: if you want to make a backpack that will sell like hotcakes, you might consider copying this design and putting it back out on the market.

The 2006 Cisco Live bag was my first.  I had been carrying a messenger bag for many years before and was considering changing over to something more comfortable.  This bag tipped the scales for me.  It’s a rugged design that it still sold today, notably on Newegg by MobileEdge.  It’s a big pack that has enough room to store a huge laptop as well as power supplies, cables, and assorted gadgets.  It also has a folding flap on the front that can be used as a shield or a place to carry a folded jacket.  I use this backpack today to carry my large laptop and it’s held up quite well for all the use it gets.  I am noticing that after 5 years the zipper pulls are starting to break off but I think that can be expected through normal wear and tear.  There aren’t quite as many pockets as I would like to carry all my gear, but that may be more a commentary on the amount of junk I carry around.

Oh boy.  2007 was, quite simply, the mistake.  I heard about this bag on the bus headed to the registration desk.  People were complaining about it all week.  I have never heard so much vitrol about something so simple.  I think the idea that Cisco had was that there were so many backpacks already, maybe a change of pace was in order.  Instead, they got a revolt.  The bag itself isn’t necessarily bad.  It is well padded and has pockets for whatever you can think to carry.  The flap secures tightly and it’s comfortable to carry.  The real problem is that it was a major step down from the backpacks of the past years.  Many people commented that Cisco must have gotten them at a great price.  The addition of a bright red color scheme seemed to scare some because network rock stars seem to be allergic to colors other than black.  Overall a notable disappointment.  I use mine at home to store computer parts and will probably end up giving it to my son sooner or later.  At least until he’s big enough to carry a bigger backpack. 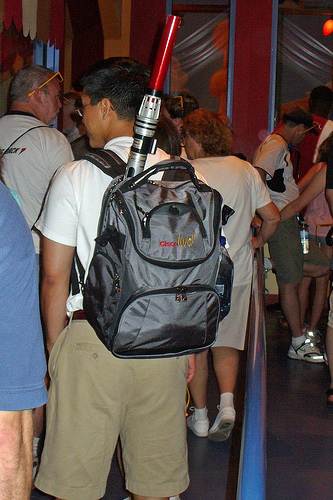 Cisco got the message in 2008.  They gave us our backpacks again.  This one was grey and devoid of any electric colors and it suited the attendees just fine.  The standout feature to me was the reinforced cable handle.  This thing could be yanked around and you never had to worry about the handle coming loose or breaking off.  The carrying straps could also be rearranged in case you wanted to use it as a large messenger bag.  I never really warmed up to this bag, but I think that’s because I didn’t get the chance to.  As soon as I got back from Cisco Live, an officemate told me that he wanted to give the bag to his teenage son.  I figured it would probably get more use from him than it would from me, so I let him have it.  It’s another popular backpack to spot at Cisco Live, as many people still carry it due to the rugged construction. 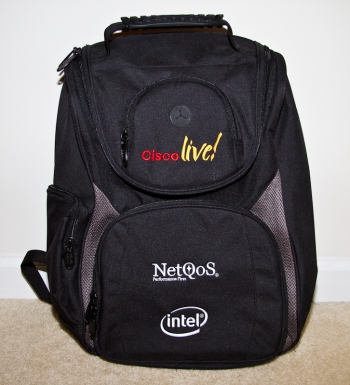 Cisco Live 2009 Backpack - many thanks to John Herbert (@MrTugs)

San Francisco was cold!  I never expected that I might freeze in the middle of the summer, but San Fran proved me wrong.  The 2009 backpack was a solid choice.  It didn’t have the reinforced carrying handle from 2008, but the padding on the straps and the back was very comfortable.  I have never really understood the need for the CD/media player pouch with headphone port on a “work” backpack, but that might be an alluring option for some.  The cords on the zipper pulls are also a very welcome change from the molded plastic of other years.  I used this bag for a bit up to the point where I started carrying my w701 which wouldn’t fit inside the laptop pocket.  I ended up giving this one to another coworker that work it with pride for quite a while.  I still see many people carrying this pack at Cisco Live events, most remarking on the comfort. 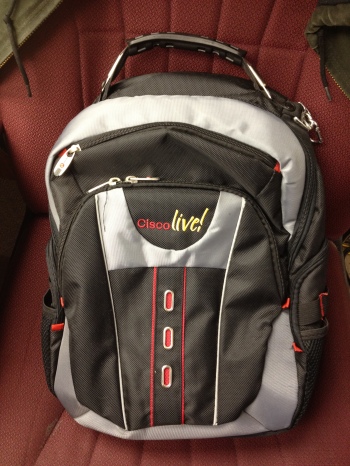 Every convention comes back to Vegas sooner or later.  So it is with Cisco Live.  2010 was my first time back in Vegas since 2006, and I was greeted by this bag.  It seems to be based around the Wenger Pegasus backpack.  It’s a very solid pack and would probably be great for a large number of users.  I saw quite a few of them at Cisco Live 2011 which is always a good indicator of the longevity and popularity of a backpack.  However, nothing about this particular bag stood out to me as far as usability in my range of carrying cases. It has lots of neat extras like adjustable straps, music player pouches, and even a tab to hold your sunglasses.  Nice additions for sure, but not high on my list of “must haves” for a network rock star backpack.  This one is a good candidate for loaners or backup laptops in my opinion.

Las Vegas still had more to give Cisco Live, and so we found ourselves back again in 2011.  This conference bag was the first in a while to have the bright colors again, this time orange to match all the orange draped in the Mandalay Bay Convention Center.  This bag is based off a reference design from Ogio, which coincidentally was the most popular backpack at Cisco Live 2007 (they flew off the shelves after the red messenger bag fiasco).  This bag has lots of space for all manner of books and laptops as well as a few catch pockets.  The big feature for this one, though, is that it meets the new TSA guidelines for travel bags.  The butterfly-style fold out allows you to send your bag through the x-ray with a minimum of shuffling.  The quality of this bag isn’t bad, but the Ogio bag it’s based on seems to have a bit better build.  I’ve heard that some people were having issues with straps and handles coming off after a few months of use.  Mine is still in almost pristine condition, but I haven’t really been using it because it won’t fit the behemoth.  If I had to start using something other than my APC or Live 2006 bag, it would probably be this one.

This year for Cisco Live, we get to choose our bag!  We have the options of a backpack, a nice messenger bag, or even a gym bag.  I really do appreciate allowing the attendees to choose our favorite.  Some want a messenger bag because of the ease of carrying or the more professional look.  Others want the backpack to upgrade from whatever they might be carrying.  Still others want something a little different and think the gym bag would be a welcome change from the norm (as well as a great way to haul back the Cisco Live swag).  You can head over to the Cisco Live conference site and vote for your favorite.  Be sure your voice is heard.

Putting this post together was a trip down memory lane.  I can remember picking up each of these bags from the registration desk and trying my best to cram the contents of my current backpack inside.  Each of them is a reminder of fun times and lots of learning opportunities.  I hope that others can look back and see what kinds of backpacks we’ve gotten before and use them as a comparison to the future conference bags.  Those that forget the backpacks of the past are doomed to repeat them.  Although, for many of the backpacks on this list, a repeat wouldn’t be a bad thing…

Thanks to John Herbert (@MrTugs) and Jeff Fry (@FryGuy_PA) for their help in compiling this post.