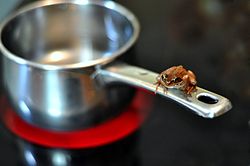 Frog on a Saucepan – courtesy of Wikipedia

Unless you’ve been living under a big rock for the last couple of weeks, you’ve no doubt heard about the plunge that Apple stock took shortly after releasing their numbers for the previous quarter.  Apple sold $54 billion dollars worth of laptops, desktops, and mobile devices.  They made $13 billion dollars in profit.  They sold 47 million iPhones and almost 23 million iPads.  For all of these record-setting numbers, the investors rewarded Apple by driving the stock down below $500 dollars a share, shaving off a full 10% of Apple’s value in after-hours trading after the release of these numbers.  A lot of people were asking why a fickle group of investors would punish a company making as much quarterly profit as the gross domestic product of a small country.  What has it come to that a company can be successful beyond anyone’s wildest dreams and still be labeled a failure?

The world has become accustomed to incremental awesomeness.

Apple is as much to blame as anyone else in this matter, but almost every company is guilty of this in some form or another.  We’ve reached the point in our lives where we are subjected to a stream of minor improvements on things rather than huge, revolutionary changes.  This steady diet of non-life changing features has soured us on the whole idea of being amazed by things.  If you had told me even 5 years ago that I would possess a device in my pocket that had a camera, GPS, always-on Internet connection, appointment book, tape recorder, and video camera, I would have either been astounded or thought you crazy.  Today, these devices are passé.  We even call phones without these features “dumb phones” as if to demonize them and those that elect to use them.  We can no longer discern between the truly amazing and the depressingly commonplace.

When I was younger, I heard someone ask about boiling a frog alive.  I was curious as to what lesson may lie in such a practice.  If you place a frog into a pot of boiling water, it will hop right back out as a form of self-preservation.  However, if you place a frog in a pot of tepid water and slowly raise the temperature a few degrees every minute, you will eventually boil the frog alive without any resistance.  Why is that?  Well, by slowly raising the temperature of the water, the frog becomes accustomed to the change.  A few degrees one way or the other doesn’t matter to the frog.  However, those few degrees eventually add up to the boiling point.

We find ourselves in the same predicament.  Look at some of the things that users are quibbling over on the latest round of phones and other devices.  The Nexus 4 phone is a failure because it doesn’t have LTE.  The iPad Mini is useless because it doesn’t have a Retina screen.  The iPhone 5 is far from perfect because it’s missing NFC or it’s not a 5-inch phone.  The Nexus 7 needs more storage and shouldn’t be Wi-Fi only.  Look at any device out there and you will find that they are missing features that would keep them from being “perfect”.  Those features might as well be things like inability to read your mind or project information directly onto the cornea.  I’ve complained before that Google is setting up Google Glass to be a mundane gadget because they aren’t thinking outside their little box.  This kind of incremental improvement is what we’ve become accustomed to.  Think about the driverless car that Google is supposedly working on.  It’s an exciting idea, right? Now, think about that invention in 5 years time when it becomes ubiquitous.  When version 6 or 7 of the driverless car is out, we’re going to be complaining about how it doesn’t anticipate traffic conditions or isn’t able to fly.  We will have become totally unimpressed with how awesome the idea of a driverless car is because we’re concentrating on the things that it doesn’t have.

We want to be impressed and surprised by things.  Even when we are confronted with groundbreaking technology, we reject it at first out of spite.  Remember how the iPad was going to be a disaster because people don’t want to use a big iPhone?  Now look at how many are being used.  People want to walk away from a product announcement with a sense of awe and wonder, not a list of features and the same case as last year.  We’ve stopped looking at each new object with a sense of wonder and amazement and instead we focus on the difference from last year’s model.  Every new software or hardware release raises the temperature a few more degrees.  Before long, we’re going to be boiling in our own contempt and discontent.  And the next generation is going to have it even worse.  Even now, I find my kids are spoiled by the ability to watch TV shows on a tablet in any room in the house on their schedule instead of waiting for an episode to air.  They no longer even need to remember to record their favorite show on the DVR.  They just launch the app on their table and watch the show whenever they want.  Something that seems amazing and life-changing to me is commonplace to them.  All of this has happened before.  All of this will happen again.

Instead of judging on incremental advancements, we should start looking at things on the grand scale.  Yes, I know that some companies are going to constant underwhelm the buying public by delivering products that are slightly more advanced than the previous iteration for an increased cost.  However, when you step back and take a look at everything on a long enough time line, you’ll find that we are truly living in an age when technology is amazing and getting better every day.  Sure, I’m waiting for user interfaces like the ones from Minority Report or the Avengers.  I want a driverless car and a thought interface for my computer/phone/widget.  But after seeing what happens to companies that are successful beyond their wildest imaginations I’ll be doing a much better job of looking at things with the proper perspective.  After all, that’s the best way to keep from getting boiled.