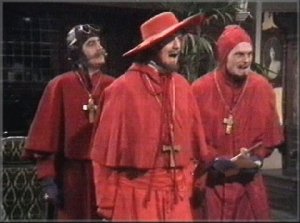 [The door flies open and an SDN Developer  enters, flanked by two junior helpers. An SDN Assistant [Jones] has goggles pushed over his forehead. An SDN Blogger [Gilliam] is taking notes for the next article]

Network Engineer: I didn’t expect a kind of Inquisition.

[The cardinals burst in]

SDN Developer: NOBODY expects the SDNquisition! Amongst our weaponry are such diverse elements as: programmability, orchestration, Open Source development, an almost fanatical devotion to disliking hardware, and nice slide decks – Oh damn!
[To Cardinal SDN Assistant] I can’t say it – you’ll have to say it.
SDN Assistant: What?
SDN Developer: You’ll have to say the bit about ‘Our chief weapons are …’
SDN Assistant: [rather horrified]: I couldn’t do that…

Network Engineer: I didn’t expect a kind of Inquisition.

SDN Assistant: We’ll soon change your mind about that!

[SDN Assistant produces an API design definition. SDN Developer looks at it and clenches his teeth in an effort not to lose control. He hums heavily to cover his anger]

[SDN Assistant stands their awkwardly and shrugs his shoulders]

[SDN Assistant types on an invisible keyboard at the IDE screen]

[Cut to them torturing a dear old lady, Marjorie Wilde]

SDN Developer: Now, old woman — you are accused of heresy on three counts — heresy by having no API definition, heresy by failure to virtualize network function, heresy by not purchasing an SDN startup for your own needs, and heresy by failure to have a shipping product — *four* counts. Do you confess?
Wilde: I don’t understand what I’m accused of.
SDN Developer: Ha! Then we’ll make you understand! SDN Assistant! Fetch…THE POWERPOINT!

SDN Assistant: Here it is, lord.
SDN Developer: Now, old lady — you have one last chance. Confess the heinous sin of heresy, reject the works of the hardware vendors — *two* last chances. And you shall be free — *three* last chances. You have three last chances, the nature of which I have divulged in my previous utterance.
Wilde: I don’t know what you’re talking about.
SDN Developer: Right! If that’s the way you want it — Cardinal! Animate the slides!

[SDN Assistant carries out this rather pathetic torture]

SDN Developer: So you think you are strong because you can survive the Powerpoint. Well, we shall see. SDN Assistant! Show her the Needlessly Complicated Visio Diagram!

[They shove the diagram into her face]