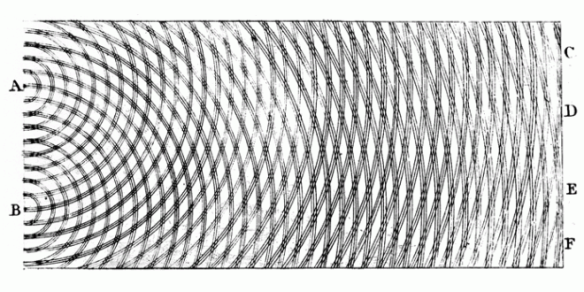 Quantum physics is a funny thing. It seeks to solve all the problems in the physical world by breaking everything down into the most basic unit possible. That works for a lot of the observable universe. But when it comes to light, quantum physics has issues. Thanks to experiments and observations, most scientists understand that light isn’t just a wave and it’s not just a collection of particles either. It’s both. This concept is fundamental to understanding how light behaves. But can it also explain how data behaves?

We tend to think about data as a series of discrete data units being pushed along a path. While these units might be frames, packets, or datagrams depending on the layer of the OSI model that you are operating at, the result is still the same. A single unit is evaluated for transmission. A brilliant post from Greg Ferro (@EtherealMind) sums up the forwarding thusly:

It’s simple when you think about it. But what makes it a much deeper idea is that lookup at layer 2 and 3 requires a lot more processing. Each of the packets must be evaluated to be properly forwarded. The forwarding device doesn’t assume that the destination is the same for a group of similar packets. Each one must be evaluated to ensure it arrives at the proper location. By focusing on the discrete nature of the data, we are forced to expend a significant amount of energy to make sense of it. As anyone that studied basic packet switching can tell you, several tricks were invented to speed up this process. Anyone remember store-and-forward versus cut-through switching?

Flows behave differently. They contain state. They have information that helps devices make intelligent forwarding decisions. Those decisions don’t have to be limited by destination MAC or IP addresses. They can be labels or VLANs or other pieces of identifying information. They can be anything an application uses to talk to another device, like a DNS entry. It allows us to make a single forwarding decision per flow and implement it quickly and efficiently. Think about a stateful firewall. It works because the information for a given packet stream (or flow) can be programmed into the device. The firewall is no longer examining every individual packet, but instead evaluates the entire group of packets when making decisions.

Consequently, stageful firewalls also give us a peek at how flows are processed. Rather than having a CAM table or an ARP table, we have a group of rules and policies. Those policies can say “given a group of packets in a flow matching these characteristics, execute the following actions”. That’s a far cry from trying to figure out where each one goes.

It’s All About Scale

A single drop of water is discrete. Just like a single data packet, it represents an atomic unit of water. Taken in this measurement, a single drop of water does little good. It’s only when those drops start to form together that their usefulness becomes apparent. Think of a river or a firehose. Those groups of droplets have a vector. They can be directed somewhere to accomplish something, like putting out a fire or cutting a channel across the land.

Flows should be the atomic unit that we base our networking decisions upon. Flows don’t require complex processing on a per-unit basis. Flows carry additional information above and beyond a 48-bit hex address or a binary address representing an IP entry. Flows can be manipulated and programmed. They can have policies applied. Flows can scale to great heights. Packets and frames are forever hampered by the behaviors necessary to deliver them to the proper locations.

Data is simultaneously a packet and a flow. We can’t separate the two. What we can do is change our frame of reference for operations. Just like experiments with light, we must choose one aspect of the duality to act until such time as the other aspect is needed. Light can be treated like a wave the majority of the time. It’s only when things like the photoelectric effect happen that our reference must change. In the same way, data should be treated like a flow for the majority of cases. Only when the very basic needs of packet/frame/datagram forwarding are needed should we abandon our flow focus and treat it as a group of discrete packets.

The idea of data flows isn’t new. And neither is treating flows as the primary form of forwarding. That’s what OpenFlow has been doing for quite a while now. What makes this exciting is when people with new networking ideas start using the flow as an atomic unit for decisions. When you remove the need to do packet-by-packet forwarding and instead focus on the flow, you gain a huge insight into the world around the packet. It’s not much a stretch to think that the future of networking isn’t as concerned with the switching of frames or routing of packets. Instead, it’s the forwarding of a flow of packets that will be exciting to watch. As long as you remember that data can be both packet and flow you will have taken your first step into a larger world of understanding.