In this week’s issue of the Packet Pushers Human Infrastructure newsletter, there was an excellent blog post from Kam Lasater about how talking about technical debt makes us sound silly. I recommend you read the whole thing because he brings up some very valid points about how the way the other departments of the organization perceive our issues can vary. It also breaks down debt in a very simple format that takes it away from a negative connotation and shows how debt can be a leverage instrument.

To that end, I want to make a modest proposal to help the organization understand the challenges that IT faces with older systems and integration challenges. Except we need some new branding. So, I propose we start referring to technical debt as “underperforming technical investments”.

I’d Buy That For A Dollar

Technical debt is just a clever way to refer to the series of layered challenges we face from decisions that were made to accomplish tasks. It’s a burden we carry negatively throughout the execution of our job because it adds extra time to the process. We express it as debt because it’s a price that must be paid every time we need to log in to the old accounting system to make changes or we have to wake up on the third Sunday of the month to reboot the access points because of a software bug that we can’t fix.

As Lasater points out, the financial departments look at debt differently. It’s not always negative. Commercial paper allows for purchasing power beyond cash-on-hand. Mortgages and loans allow us to buy houses and cars that enable us to do much more with our lives. Reasonable debt can be good so long as what we get out of it is a net positive. Debt doesn’t become an issue until there’s too much of it for the return we get, which eventually leads to bankruptcy.

Let’s point out some of the challenges we face with technical things that we refer to as debt. We usually use it in reference to outdated systems or slower equipment that doesn’t allow us to do our jobs as effectively as possible. Unlike a house which still provides the value of a dwelling at any age given reasonable maintenance or a car that still operates with the same maintenance, technology changes more rapidly. The original iPhone is unable to operate in a modern environment because of outdated software or inability to connect to the mobile network.

In consumer tech, the idea of technical debt doesn’t exist. Because when things are “slow” or “broken” they get discarded and people spend money to get something new. Someone that is willing to live with a shattered phone screen because they don’t want to pay to fix it might be willing to wait another two months to get a new device because it supports the latest OS updates or has a better camera. The chase for new features is usually enough of a driver to get people to upgrade.

In the enterprise, the infrastructure equipment is expensive enough that we need to recognize the value of what we installed. We can’t just swap out all the switches in three years if we spent hundreds of thousands of dollars on them. Likewise, enterprise tech vendors are more likely to provide patches and updates for this gear knowing that customers are going to hold on to it for longer periods of time. And even then, just because something is EoL doesn’t mean it’s End of Use.

However, the disconnect between these two things comes when we talk about how equipment that is functional is also causing issues with our job. Maybe it’s an older, slower switch that drops more packets than the rest of the newer gear. It’s a problem but not big enough to justify buying a new one. It could be an older wireless controller that doesn’t have the capability to run the newest code because of an older CPU. We have gear that works but it doesn’t work as well as it could. But we also don’t have enough justification to get new stuff because the old things haven’t broken completely yet.

Putting Your Money Where Their Mouth Is 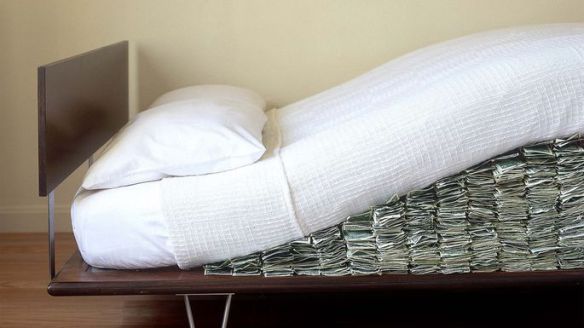 As Lasater says in the above article, talking about how it’s hard to do your job because everything is old doesn’t resonate with management. No one really wants to hear a department head whining about how their job is tough because they don’t have the latest toys. Admit it, you’d be upset if your CEO told you they couldn’t answer their email because they don’t have the newest MacBook Pro. Capable means functional in every enterprise.

However, I think the challenge we face and the solution to the problem is how we frame the discussion of the challenge itself. We talk about it as a debt that we feel saddled with. It’s something we did because we had to or something someone else chose to do that we have to live with. It feels like we’re paying a tax every day over something that we don’t like. But choices need to be made and we have to work with what we have. Unless we can provide for a way to get people to understand the tradeoffs.

Hence, my proposal above. First, we stop referring to IT infrastructure gear as “technical debt”. It’s not something we bought and now have to deal with. Our accounting departments are amortizing the acquisition costs of the equipment over a period of time and writing it off of taxes against recognized revenue. There is a real dollar amount attached to every month of the lifetime of a switch or a server. That’s how finance sees your equipment. It’s not debt.

That’s your key to helping them understand the challenges you face. You’re not complaining about doing your job more slowly. Instead, you’re pointing out that you are investing a resource (your time) into a process that could have reduced resource requirements (again, your time and job execution time) if they would just invest in a different solution.

You’re not telling them they bought a lemon. Instead, you’re just telling them that the thing they invested in years ago isn’t performing as well as it could based on new data. If you need to break it down even further for your executive team you can just equate it to a home loan refinancing. If interest rates have dropped since you bought your home, doesn’t it make a ton of sense to refinance and take advantage of the savings? Likewise, if the speed or power of a system has increased in the past four years doesn’t it make sense to invest in something new?

When you change the discussion to focus on investment of resources instead of dealing with debt you change the way that the people will look at the return on that investment. If you just talk about debt the executives are going to easily be able to dismiss you because there is no upside to the conversation. They have to pay money to replace things so why spend it? If you talk about how much they could save on labor or how much more efficiently things could run if they made some changes or bought something new then that is harder to ignore. If their existing investment is underperforming some baseline on the stock market they’re going to want to move it right away. If the company’s stock is underperforming you can better believe some of the shareholders are going to want to move their investment too.

One word of warning here. You can’t go in to this conversation with vague assurances that spending more money will make money. You have to come with numbers that support your case. Some of them are easy. You know what the new system will cost. You know how much time it will take to implement it. What you need to bring is the cost of what you are paying now to do things inefficiently.

If your team of 5 has to spend two extra hours a week doing something because the system is old or doesn’t work well with others then you have ten hours of lost time. You need to figure out what the value of your time is. Big note here: Don’t just divide your yearly salary by 2000 and take the averages. That’s what you’re getting paid. That’s the debt that the company incurs to keep you on staff. Instead, find out what your rate is. If you are billed at a higher rate than your earnings, which is almost a guarantee, use that number instead. If you’re an engineer for a reseller your hourly billing rate is easy to find. If you work in corporate IT the rate is harder to figure out but if you need a rule of thumb just figure out what your hourly pay rate is (yearly salary divided by 2000 hours per year) and double it. That’s the kind of return that any company would love to have on an investment. If it’s costing the company that much to do something inefficiently then you can make your case to get it fixed or replaced.

Lastly, make sure to record the changes and the results if you manage to make it happen. It’s easy to chart when you take more time to do something to prove a point. But it’s easy to forget to do it when you have what you want. Eventually, someone that manages investments needs to know if it paid off. If there’s a simple number like a stock price it’s cut-and-dried. If there’s more to the calculation you need to do the work to prove why it’s better now. And you want to keep a running total so you can provide it on demand when asked. Just tell them you have more time to track those kinds of things now that they made a wiser investment.

No one likes debt. Even the best debt is still an obligation to pay back to someone. However, investments are something positive. Yes, they still require resources to be exchanged to receive a good or service. However, changing the terminology changes the perception of the result. Debts are incurred and paid back begrudgingly. Investments grow and provide additional resources throughout their lives. And, importantly, when an investment isn’t paying off the way to fix it is to reinvest. It’s a clever trick but one that should work much better than just whining about drowning in debt.