Companies that don’t reinvent themselves from time to time find themselves consigned to the scrap heap of forgotten technology.  As anyone that worked at Wang.  Or Packard Bell.  Or Gateway.  But, not everyone can be like IBM.  It takes time and careful planning to pull of a radical change.  And last but not least, it takes a lot of money and people willing to ride out the storm.  That’s why Dell has garnered so much attention as of late with their move to go private.

I was invited to attend Dell World 2013 in Austin, TX by the good folks at Dell.  Not only did I get a chance to see the big keynote address and walk around their solutions area, but I participated in a Think Tank roundtable discussion with some of the best and brightest in the industry and got to take a tour of some of the Dell facilities just up the road in Round Rock, TX.  It was rather interesting to see some of the changes and realignments since Michael Dell took his company private with the help of Silver Lake Capital.

The day before Dell World officially kicked off was a day devoted to the influencers.  Sarah Vela (@SarahVatDell) and Michelle Richard (@Meesh_Says) hosted us as we toured Dell’s Executive Briefing Center.  We got to discuss some of Dell’s innovations, like the containerized data center concept. 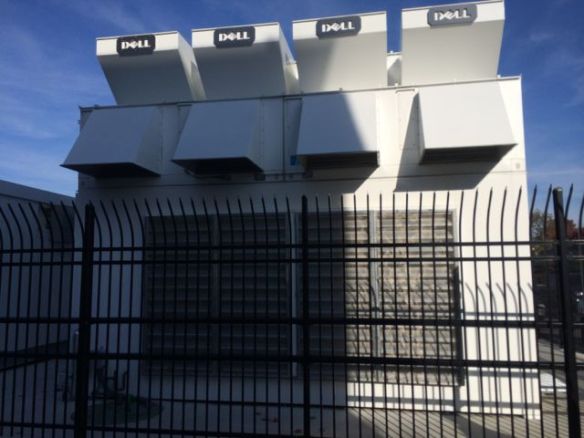 Dell can drop a small data center on your property with just a couple of months of notice.  Most of that is prepping the servers in the container.  There’s a high-speed video of the assembly of this particular unit that runs in the EBC.  It’s interesting to think that a vendor can provide a significant amount of processing power in a compact package that can be delivered almost anywhere on the planet with little notice.  This is probably as close as you’re going to get to the elasticity of Amazon in an on-premise package.  Not bad.

The Think Tank was another interesting outing.  After a couple of months of being a silent part of Tech Field Day, I finally had an opportunity to express some opinions about innovation.  I’ve written about it before, and also recently.  The most recent post was inspired in large part by things that were discussed in the Think Tank.  It believe that IT is capable of a staggering amount of innovation if they could just be given the chance to think about it.  That’s why DevOps and software defined methodologies have such great promise.  If I can use automation to take over a large part of my day-to-day work, I can use that extra time to create improvement.  Unloading the drudgery from the workday can create a lot of innovation.  Just look at Google’s Ten Percent Time idea.  Now what if that was 25%?  Or 50%?

Dell does a great job with their influencer engagements.  This was my second involvement with them and it’s been very good.  I felt like a valued part of the conversation and got to take a sneak peek at some of the major announcements the day before they came out.  I think Dell is going to have a much easier road in front of it by continuing to involve the community in events such as this.

Okay, so you all know I’m not a huge fan of keynotes.  Usually, that means that I’m tweeting away in Full Snark Mode.  And that’s if I’m not opposed to things being said on stage.  In the case of Dell World, Michael Dell confirmed several ideas I had about the privatization of his company.  I’ve always held the idea that Dell was upset the shareholders were trying to tell him how to run his company.  He has a vision for what he wants to do and if you agree with that then you are welcome to come along for the ride.

The problem with going public is much the same as borrowing $20 from your friend.  It’s all well and good at first.  After a while, your buddy may be making comments about your spending habits as a way to encourage you to pay him back.  The longer that relationship goes, the more pointed the comments.  Now, imagine if that buddy was also your boss and had a direct impact on the number of hours your worked or the percentage of the commission you earned.  What if comments from him had a direct impact on the amount of money you earned?  That is the shareholder problem in a nutshell.  It’s nice to be flush with cash from an IPO.  It’s something else entirely when those same shareholder start making demands of you or start impacting your value because they disagree with your management style.  Ask Michael Dell how he feels about Carl Icahn?  I’m sure that one shareholder could provide a mountain of material.  And he wasn’t the only one that threatened to derail the buyout.  He was just the most vocal.

With the shareholders out of the way, Dell can proceed according to the visions of their CEO.  The only master he has to answer to now is Silver Lake Capital.  So long as Dell can provide good return on investment to them I don’t see any opposition to his ideas.  Another curious announcement was the Dell Strategic Innovation Venture Fund.  Dell has started a $300 million fund to explore new technologies and fund companies doing that work.  A more cynical person might think that Michael Dell is using he new-found freedom to offer an incentive to other startups to avoid the same kinds of issues he had – answering to single-minded masters only focused on dividends and stock price.  By offering to invest in a hot new startup, Michael Dell will hopefully spur innovation in areas like storage.  Just remember that venture capital funds need returns on their investments as well, so all that money will come with some strings attached.  I’m sure that Silver Lake has more to do with this than they’re letting on.  Time will tell if Dell’s new venture fund will pay off as handsomely as they hope.

Dell World was great.  It was smaller than VMWorld or Cisco Live.  But it fit the culture of the company putting on the show.  There weren’t any earth shattering announcements to come out of the event, but that fits the profile of a company finding its way in the world for the second time.  Dell is going to need to consolidate and coordinate business units to maximize effort and output.  That’s not a surprise.  The exuberance that Michael Dell showed on stage during the event is starting to flow down into the rest of Dell as well.  Unlike a regular startup in a loft office in San Francisco, Dell has a track record and enough stability to stick around for while.  I just hope that they don’t lose their identity in this brave new world.  Dell has always been an extension of Michael Dell.  Now it’s time to see how far that can go.

I was an invited guest of Dell at Dell World 2013.  They paid for my travel and lodging at the event. I also received a fleece pullover, water bottle, travel coffee mug, and the best Smores I’ve ever had (really).  At no time did they ask for any consideration in the writing of this review, nor were they promised any.  The opinions and analysis presented herein reflect my own thoughts.  Any errors or omissions are not intentional.