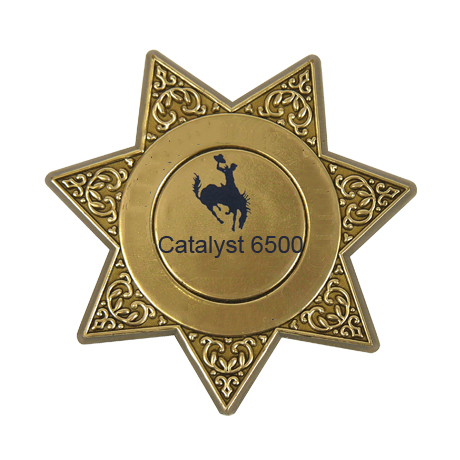 The venerable Catalyst 6500 is a switching platform that has been around for several presidential administrations.  It’s a workhorse that has helped provide connectivity for what we now refer to as the campus as well as providing a solution for the data center.  However, like star athlete in it’s waning years, it’s getting old.  Ethan has decided that the 6500 is past its prime in the campus core.  Others beg to differ.  Who’s right?

I think the issue here isn’t one of the switch being past it’s prime compared to the new products on the horizon.  Sure, the next up-and-coming sheriff is going to eclipse the veteran sitting on his horse.  The question comes down to being properly suited for the role. I think what we need to consider is that the campus userland is a totally different area than the pristine beauty of a data center.

In a data center, I have total control over what happens in my space.  I know every server and and connection.  I have everything documented and categorized.  Nothing happens without my notice or approval.  It’s a very regimented structure that keeps the critical infrastructure running while minimizing surprises.  When I have complete control over my environment, I can contemplate ideas like turning off Spanning-Tree Protocol (STP) to increase performance or disabling Port Security to prevent MAC issues with multihomed servers.  Because I can say with reliability that I know where everything is connected, I can start looking at ways to make it all run as fast as possible.  This would be like a new lawman coming into town and instituting his brand of justice learned from the Army.  Very tight, very regimented.  But based totally on rules that are very unlike the real world.

In the campus LAN, however, things begin to look more like the wild west.  At the access layer closest to the users, it’s not uncommon to see a whole host of protection mechanisms designed to prevent catastrophic network disaster from propagating to the core of your campus and then on to the data center.  Turn off STP in the access layer?  That’s a resume-generating event.  Disable port security?  Okay, but you better be ready for the onslaught of garbage.  Campus LANs aren’t the structured beauty of your data center.  At best, they are the Shootout at the OK Corral.  We employ host protection and QoS mechanisms to be sure that those gunslinger users can’t affect more than their own little domain.  No bulky FTP transfers killing the phone system.  No renegade switches being placed under desks and affecting STP paths.

To me, the distinction comes from the fact that the Nexus line of switches that we put in the data center is focused on that structured environment.  Since NX-OS is a fork of Cisco’s SAN OS, it is focused on providing connectivity among servers and storage arrays in that carefully cultivated environment.  Put one of these out in the campus core and you might find that connectivity is blazingly fast…right up to the point where someone creates a broadcast storm.  I’m sure there are mechanisms in place to prevent these kinds of things.  I just don’t know if they are as tested as the ones in the granddaddy 6500.  The 6500 also comes with a variety of service module options to help alleviate issues, such as the Firewall Service Module (FWSM) and Network Analysis Module (NAM), not to mention the wireless connectivity options afforded by a WiSM.

Ethan (and others) point out that the 6500 is reaching the end of its ability to keep up with faster and faster connectivity options.  The new Sup-2T now has the ability to introduce more 10 Gigabit ports on a linecard to aggregate links.  The Nexus line has a laundry list of 10 Gigabit connectivity options, not to mention options for 40 Gigabit and 100 Gigabit Ethernet.  Rumor has it a 40 Gigabit option will be available for the 6500 at some point, but it will likely be limited for a while due to backplane considerations (as well as requiring a new Supervisor engine).  So where does that leave the 6500?

I think what will end up happening soon is that the 6500 will become less of a campus core switch and move down into the distribution layer, perhaps even all the way to the access layer.  The 6500 still has the tools that an old sheriff needs to keep the peace in Userland.  With 10Gig and 40Gig connectivity, it can provide a fast backhaul to the distribution layer if used as an access layer device.  If it lies in the distribution layer, the ability to aggregate 10Gig links coming from the access layer is very crucial to users as the majority of traffic begins to move into the data center for things like Virtual Desktop Integration (VDI) and other heavy traffic loads.  Add in the ability of the 6500 to make intelligent decisions via service modules and you have a great device to offload complicated decision making from a core switch and allow the core to switch/route packets at high speed wherever they need to go.  This could allow you to use the new Nexus 7009 or Nexus 5500 series in the campus core and extend FabricPath/TRILL connections into the campus LAN.  That will allow the 6500 to live on providing things the Nexus can’t right now, like PoE+ and Low Latency Queuing (LLQ) which are critical to voice guys like me.

Before you say that putting a 6500 at the access layer is a mighty expensive proposition, just think about what ripping out your existing access layer to provide 10Gig uplink connectivity and Gigabit-to-the-desktop will run.  Now, add in redundancy for power and uplinks.  Odds are good the numbers are starting to get up there.  Now, think about the investment of reusing a good platform like the 6500.  You’ve already invested in supervisors and power redundancy.  If you can pick up some 10/100/1000 PoE linecards to fill it up, you have a great way to aggregate wiring closets and begin to deploy important network services closer to the edge to prevent those outlaws from rustling your precious data center network.

Any time the idea of the 6500 is brought up, you’re going to see polarization.  Some will stand by their old sheriff, confident in the fact that he’s seen it all and done it all.  Sure, he isn’t the fastest gun in the West anymore.  He doesn’t need to be.  He’s still got the smarts to outfox any outlaw.  The other camp decries that fact that the 6500 has been around before the turn of the millennium.  What they want is to put the fancy city slicker Nexus everywhere and show everyone his fancy brand of the law.  I think in this case the Catalyst still has a lot of life left to provide connectivity and services to the end users while the back end of the campus transitions to the newer high-speed platforms.  I doubt 10Gig-to-the-desktop is coming any time soon, based on Cat 6E/7 cable costs and inability to run fiber on a laptop.  That will eliminate the major points in favor of a total campus Nexus deployment.  Despite what others may say, I think the 6500 is a perfect option here, especially with the Sup-2T and newer line cards.  Just because it’s a little long in the tooth doesn’t mean it doesn’t know how the Wild Wild Campus was won.

5 thoughts on “The Wild Wild Campus”