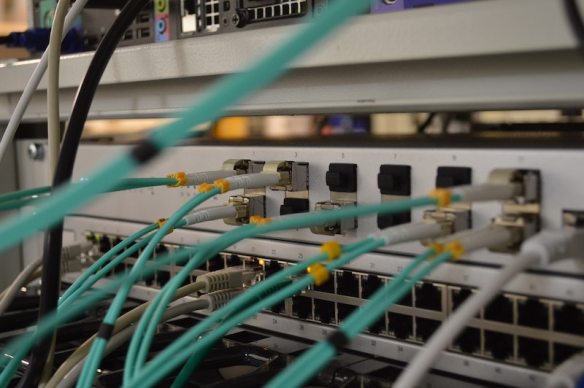 802.11ax is fast approaching. Though not 100% ratified by the IEEE, the spec is at the point where most manufacturers and vendors are going to support what’s current as the “final” version for now. While the spec for what marketing people like to call Wi-Fi 6 is not likely to change, that doesn’t mean that the ramp up to get people to buy it is showing any signs of starting off slow. One of the biggest problems I see right now is the decision by some major AP manufacturers to call 802.11ax a “wireless switch”.

In case you had any doubts, 802.11ax is NOT a switch.1 But the answer to why that is takes some explanation. It all starts with the network. More specifically, with Ethernet.

Ethernet is a broadcast medium. Packets are launched into the network and it is hoped that the packet finds the destination. All nodes on the network listen and, if the packet isn’t destined for them they discard it. This is the nature of the broadcast. If multiple stations try to talk at once, the packets collide and no one hears anything. That’s why Ethernet developed a collision detection  system called CSMA/CD.

Switches solved this problem by segmenting the collision domain to a single port. Now, the only communications between the stations would be in the event that the switch couldn’t find the proper port to forward a packet. In every other case, the switch finds where the packet is meant to be sent and forwards it to that location. It prevents collisions by ensuring that no two stations can transmit at any one time except to the switch in the middle. This also allows communications to be full-duplex, meaning the stations can send and receive at the same time.

Wireless is a different medium. The AP still speaks Ethernet, and there is a bridge between the Ethernet interface and the radios on the other side. But the radio interfaces work differently than Ethernet. Firstly, they are half-duplex only. That means that they have to send traffic or listen to receive traffic but they can’t do both at the same time. Wireless also uses a different version of collision detection called CSMA/CA, where the last A stands for “avoidance”. Because of the half-duplex nature of wireless, clients have a complex process to make sure the frequency is clear before transmitting. They have to check whether or not other wireless clients are talking and if the ambient RF is within the proper thresholds. After all those checks are confirmed, then the client transmits.

Because of the half-duplex wireless connection and the need for stations to have permission to send, some people have said that wireless is a lot like an Ethernet hub, which is pretty accurate. All stations and APs exist in the contention (collision) domain. Aside from the contention algorithm, there’s nothing to stop the stations from talking all at once. And for the entire life of 802.11 so far, it’s worked. 802.11ac started to introduce more features designed to let APs send frames to multiple stations at the same time. That’s what’s called Multi-user Multi-In, Multi-out (MU-MIMO).In theory, it could allow for full-duplex transmissions by allowing a client to send on one antenna and receive on another, but utilizing client radios in this way has impacts on other things.

Enter 802.11ax. The Wi-Fi 6 feature that has most people excited is Orthogonal Frequency-Division Multiple Access (OFDMA). Simply put, OFDMA allows the clients and APs to not use the entire transmission channel for sending data. It can be sliced up into sub-channels that can be used for low-bandwidth applications to reserve time to talk to the AP. Combined with enhanced MU-MIMO support in 802.11ax, the idea is that clients can talk directly to the AP and allocate a specific sub-channel resource unit all to themselves.

To the marketing people in the room, this sounds just like a switch. Reserved channels, single station access, right? Except it is still not a switch. The AP is still a bridge between two media types for one thing, but more importantly the transmission medium still hasn’t magically become full-duplex. Stations may get around this with some kind of trickery, but they still need to wait for the all-clear to send data. Remember that all stations and APs still hear all the transmissions. It’s still a broadcast medium at the most basic. No amount of software configuration is going to fix that. And for the networking people in the room that might be saying “so what?”, remember when Cisco tried to sell us on the idea that StackWise was capable of 40Gbps of throughput because it could send in both directions on the StackWise ring at once? Remember when you started screaming “THAT’S NOT HOW BANDWIDTH WORKS!!!” That’s what this is, basically. Smoke and mirrors and ignoring the underlying physical layer constraints.

In fact, if you read the above resources, you’re going to find a lot of caveats at the end about support for protocols coming up and not being in the first version of the spec. That’s exactly what happened with 802.11ac. The promise of “gigabit Wi-Fi” took a couple of years and the MU-MIMO enhancements everyone was trumpeting never fully materialized. Just like all technology, the really good stuff was deferred to the next release.

To make sure that both sides are heard, it is rightly pointed out by wireless professionals like Sam Clements (@Samuel_Clements) that 802.11ax is the most “switch-like” so far, with multiple dynamic collision domains. However, in the immortal words of Tyler Durden, “Sticking feathers up your butt doesn’t make you a chicken.” The switch moniker is still a marketing construct and doesn’t hold any water in reality aside from a comparison to a somewhat similar technology. The operation of wireless APs may be hub-like or switch-like, but these devices are not either of those types of devices.

The other issue that I see that prevents this from becoming a switch is the CPU on the AP becoming a point of contention. In a traditional Ethernet switch, the forwarding hardware is a specialized ASIC that is optimized to forward packets super fast. It does this with some trickery, including cut through for packets and trusting the incoming CRC. When packets bounce up to the CPU to be process-switched, it bogs the entire system down terribly. That’s why most networking texts will tell you to avoid process switching at all costs.

Now apply those lessons to wireless. All this protocol enhancement is now causing the CPU to have to do extra duty to work on time-slicing and sub-channel optimization. And remember that those CPUs are operating on 18-28 watts of power right now. Maybe the newer APs will get over 30 watts with new PoE options, but that means those CPUs are still going to be eating a lot of power to process all this extra software work. Even adding dedicated processing power to the AP isn’t going to fix things in the long run. That might be one of the reasons why Cisco has been pushing enhanced PoE in the run-up to their big 802.11ax launch at the end of April.

Let me say it again for the cheap seats: 802.11ax is NOT a wireless switch! The physical layer technology that 802.11 is built on won’t be switchable any time soon. 802.11ax has given us a lot of enhancements in the protocol and there is a lot to be excited about, like OFDMA, BSS coloring, and TWT. But, like the decision to over-simplify the marketing name, the idea of calling it a wireless switch just to give people a frame of reference so they buy more of them is just silly. It’s disingenuous and sounds more like a snake oil salesman than honest technology marketing. Rather than trying to trick the users with cute sounding terms, how about we keep the discussion honest and discuss the pros and cons of the technology?

Special thanks to my friends in the wireless space for proofreading this post and correcting my errors in technology: